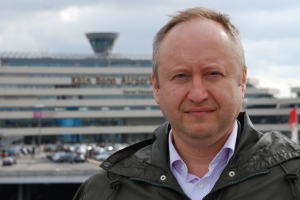 I was born in Istanbul in 1965. I think I was a typical Istanbul guy. Namely in a few words; gentleman, socialiser, environmentalist.

In Turkey, there was a television with one channel in the period of 1968 and 1990 in my childhood and youth. A very limited people had black/white television and home telephone facilities when I was child. After the mid of 1980’s, color television and home telephone facilities increased. We met the computers at the being of the 1990’s and the internet at the end of the 1990’s commonly. In brief, my generation witnessed the time period changing rapidly from 1970’s to 2010’s in Turkey.

I like drinking Turkish coffee and tea. I like it not only for drinking but also for preparing, presenting, drinking during chatting with my friends. Each phases should be considered as a part of the ceremony.

I also like to work on simple creative works. For instance, I try cooking omelet in many different ways. I try decluttering otherwise in my home. I try studing differently in my office and home, flexible but result-oriented.

I support the Fenerbahçe football team in Turkey. Its colors are yellow and navy blue.

I graduated as Forest Engineer from İstanbul University, Forestry Faculty in 1987.  I started to like mostly my job after my understanding on ecology had developed. I have been working on the global and regional processes on forest and forestry, and continuing a post graduate thesis on green marketing.